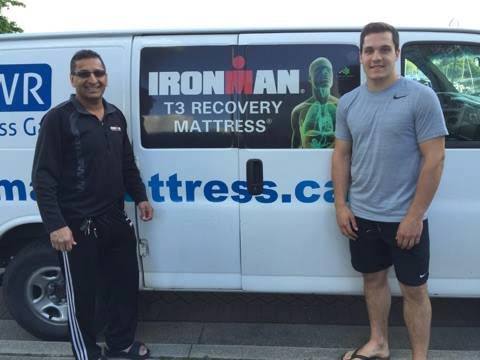 If youâ€™re a fan of any professional sport, youâ€™ll know how much time and effort goes into every aspect of an athleteâ€™s training. From diet to on- and off-season workouts, to how much and when they sleep.

Thatâ€™s why we were so excited when Bo Horvat, star player of the Vancouver Canucks, came in to purchase an IRONMAN Mattress. Bo joins a growing number of elite athletes who are choosing IRONMAN Mattresses for their healing properties, so they can perform at the best of their abilities.

IRONMAN Mattresses were originally made with Ironman athletes in mind. These endurance athletes compete in a 3.86 km swim, a 180.25 km bicycle ride and a marathon 42.20 km run, raced in that order and without a break. After a race like that, itâ€™s imperative that the body is given a chance to heal. Could there be a better time to heal than while they sleep?

Ironman Mattresses use a state-of-the-art fibre technology called Celiant fibres. Celiant fibres are made of a combination of naturally occurring elements like titanium dioxide, silicon dioxide and aluminum oxide, which are then processed into a powder and later turned into fibres. These fibres are eventually woven together to make up the Celliant material that is used along with synthetic fibre in the construction of the mattresses.

The mattresses help the body heal because Celiant fibres harness the natural energy emitted from our bodies. The fibre absorbs the heat energy emitted from a personâ€™s body while they sleep, then they transform that energy into Far Infrared light (FIR). From there, the fibres redistribute the FIR energy back throughout the body, where it penetrates into muscles, tissues and bloodstream in order to accelerate a personâ€™s natural healing process.

The Celiant fibres help to oxygenate the blood, and with higher oxygenated blood, the body will repair itself more quickly. In other words, it will put your body in a state that allows it to heal more quickly.

Word about these incredible mattresses is spreading quickly throughout the athlete community. As anyone who watched the recent NHL Stanley Cup Playoffs, or are a fan of any sport from tennis to soccer to basketball to football, youâ€™ll see what kind of intense strain players put their bodies through game after game. In order to keep a career going, athletes need to make smart decisions about how they can heal their body between games.

In fact, Bo loved his mattress so much that he purchased one for his summer home, too.

If you are curious about the healing power of IRONMAN Mattresses, our knowledgable and friendly staff at M&N and WR Mattress can tell you more about them. And you donâ€™t even have to be an elite athlete to feel the healing benefits of this amazing technology.